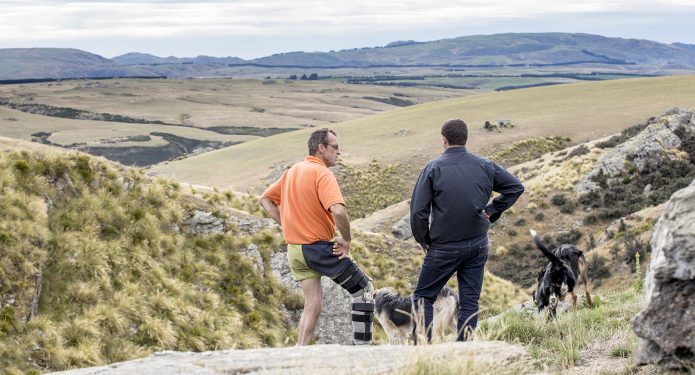 High Country. At 500 metres altitude he deals with climatic extremes, seeing both droughts and snow.

During the height of the summer, most days will crack 30 degrees, combined with strong westerly winds, it’s a recipe for the ‘big dry’ and in winter the property will often see over a metre of snow on the hills.

Mick used to manage a dairy farm before he bought his 300 hectare sheep and beef property three years ago. He had been using Hatuma Dicalcic Phosphate® on the dairy farm and was so impressed with the results he knew it would successfully nourish the hill country soils too.

Mick recently bought a 200 hectare run off block and applies Hatuma Dicalcic Phosphate® on this property too.

“Hatuma Dicalcic Phosphate provided a real solution for us on both properties. When we took over the farm the soil hadn’t seen much of anything for a long time. Soon after the first application we noticed significant growth and healthier soil.”

“As a high country farmer we need to get lime into the soil. In one cost effective application we can now do that with Hatuma Dicalcic Phosphate and have healthier grasses and ground cover, lower input and better production.”

Mick uses 350kg/ha of Hatuma #8S as an annual dressing across both properties.

Mick has found the best time of year to apply Hatuma Dicalcic Phosphate® is the autumn.

“In the first year we were here it was really dry and we were buying silage and feeding grain to try and keep everything growing and now, after three years, we have loads of feed and I believe that can be attributed to Hatuma Dicalcic Phosphate.”

The farm grows winter feed crops including kale, rape and swedes and a Hatuma blend is tailored to his soil test results.

“Our crops are hungry for nutrients and we find the Hatuma Dicalcic Phosphate gives them a good boost, helping us to feed our stock through the winter.”

“We are back grazing a paddock in 25 days at the moment and we are seeing a lot of pasture growth. The stock is grazing more evenly, which is a sign of good pasture palatability.”

Mick says he noticed a significant increase in the amount of clover across the property.

“It looks really good right up until Christmas and the clover all flowered this year so it was looking fantastic.”

“If we get rain in late autumn, we will see the clover come back again and it will have another go.”

Impressed by the initial results from the Hatuma Dicalcic Phosphate®, Mick began using it more extensively across his farm and says he noticed his stock were a lot cleaner and he wasn’t having to dag his sheep as often.

“At weaning we used to get a bit of fly strike. But after using Hatuma Dicalcic Phosphate we had no dags and the lambs were clean at weaning and fly strike wasn’t a problem anymore. We have just shorn our lambs and the wool was as white as snow.”

Mick says his stock were less stressed and, as a result, he feels he has increased production.

“Production has most probably gone up by a third already. Our lamb weaning weights are higher and our wool yield is better. For example, the ewes are easily shearing five and a half kilos and yielding really well.”

“We are only drenching the ewes once pre-tupping and we are following the lambs along as they need. We are certainly finding that the animal health costs have come right back and we don’t have to worry about any copper anymore.”

“Hatuma Dicalcic Phosphate has changed the attitude of the stock and how they operate as well. We are finding our stock quieter and easier to handle, which causes less stress for me.”

Hatuma Dicalcic Phosphate® is manufactured in Oamaru at Parkside Quarries, which means Mick can save on transport costs, but mainly because the fertiliser is applied with one application.

“Our fertiliser bill has halved and the main saving is due to the one application. We used to apply the super and lime separately but now we are putting one application on with Hatuma Dicalcic Phosphate, so it’s quite a bit cheaper.”

Mick’s farm boundaries a deep stream and is regularly monitored for water quality by the Otago Regional Council. He says using a non-water soluble fertiliser helps protect the waterways and is kinder on the environment.

“I think as part of future proofing our property we need to take a holistic approach and I think Hatuma Dicalcic Phosphate is one of those approaches. It’s a long-term solution to soil health which leads to animal health and to everybody’s health.”

Available nationwide. To find out how Hatuma Dicalcic Phosphate® can help results on your high country farm, call 0800 80 65 65 or email